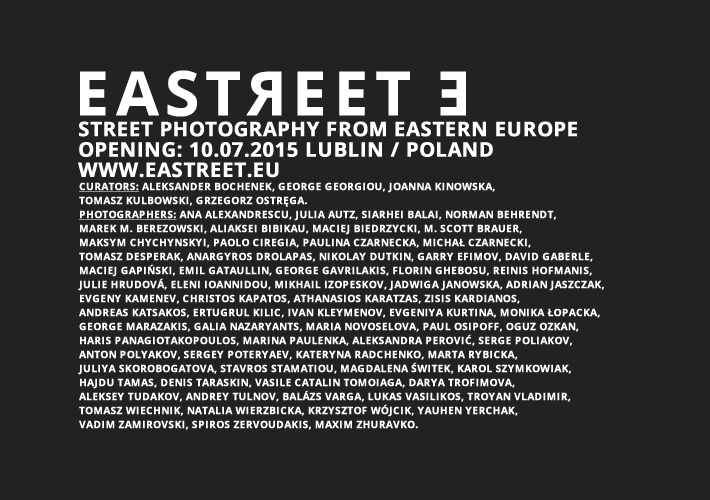 The Curators finished their work on Eastreet 3 – an exhibition and publication promoting street photography from Eastern Europe. From around 10.000 photos submitted, 82 photos from 18 countries were selected for this year’s edition.

Big thank you to the Curators team: Joanna Kinowska, Aleksander Bochenek, Tomasz Kulbowski, Grzegorz Ostręga and last but not least – our special guest curator this year, George Georgiou! Thank you to all the participants, friends and supporters of Eastreet for such a great response this year.

Congratulations and thank you for being a part of Eastreet!

The new edition of Eastreet will have it’s premiere on 10th July 2015 in Lublin, Poland. Once again we will have a closer look at human presence within the public spaces of Eastern Europe, through the unposed, spontaneous, photos, documenting the unique moments, ideas and symbols. Photos which can help us to visually describe the region, to look at it beyond stereotypes, borders and differences, but at the same time – attempt to define Eastern Europe, show it’s current state and unique qualities. The goal of Eastreet is to create a complex and diverse portrait of the region and street photography itself, in a form of group exhibition and publication.

Photos selected by a group of Curators will be presented in a form of a gallery exhibition, as well as an additional outdoor installation in the Lublin’s city centre. We will publish a special book presenting all the selected photographs and authors. Each author will receive the book from us free of charge, by post, soon after the exhibition opening. The publication will be also distributed during the opening, as well as within a specially selected group of international institutions, galleries and curators.

Subscribe to our newsletter or join Facebook page or event to stay up to date with latest news about Eastreet. Have a look at the documentary photography education programme we’ve prepared for you this year. Join us at the opening on Friday 10th July 2015!

See you in Lublin,

The Eastreet 3 exhibition is a part of the East of Culture project which is organised with the support from Ministry Of Culture And National Heritage (MKiDN), National Centre for Culture (NCK) and by creative communities and local governments of Eastern Poland.